When Vivienne Francis attended WLRI’s Foundations 101 course, she was working as a Gender Land Rights Officer for the Liberian NGO Action for Community Transformation (ACT). Though she was born in Liberia, she was raised primarily in Sierra Leone, and made connections within the Liberian community when she returned there as an adult. Using her background in finance, Ms. Francis began volunteering for organizations that focused on women and youth in the development sector, eventually resulting in hands-on field work. “In 2018, Libera had a huge land reform and the government didn’t have funds to publicize the work,” she recalled. “I was the only woman who was going into the field at that time, so I was often chosen to speak with women – which enabled me to develop my role as Gender Officer.” 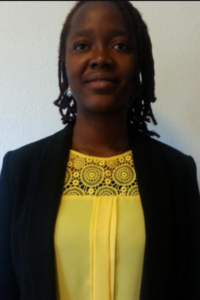 One of the main reasons that Ms. Francis applied to be part of WLRI’s first cohort was the opportunity to network with others in her field. “That was so invaluable,” she continued. “Learning from others who work in women’s land tenure and resource rights, from around the world, provided me with significant insight into how to address some of the challenges that we’re seeing in Liberia.”

She found the measurement and evaluation topics especially useful, but key learnings were around how to get men interested in this work. “Often, men see this as simply a ‘women’s issue,’ and it’s not,” Ms. Francis shared. “Ensuring the women in the community have secure rights is critical to a family’s legacy, as well as ensuring the family experiences the benefits of building generational wealth.”

The course discussions provided Ms. Francis with a framework that she was able to leverage in her work with ACT. “You can’t deal with the land rights issue without upsetting people’s cultural and social norms,” she noted. “It’s very delicate, and as I worked with my team to expand our understanding, we realized that it’s more complicated than we might think. If we’re going into a specific community to talk with them about land, it’s not enough to say, ‘we spoke with 50 people, or 100 women attended the session.’ Rather, WLRI taught me that we needed to ask more specific questions about the proportion of the community that was represented, the diversity of the women involved, and if youth were engaged in the conversation. Ultimately, it inspired us to identify different markers for success, so that we knew that the work we were doing was benefiting the community overall.”

Unfortunately, Ms. Francis had to leave her volunteer position at ACT because the organization doesn’t have enough funding to support her role as a paid position. “Before I left, I wanted to create a campaign to integrate more vigorous gender indicators into the organization’s program and project development,” she explained. “While I was there, I was able to advocate for women in the community, largely because, as a woman, I was often the only person they felt comfortable talking to in the field. I am happy that some of the men in the organization have adopted more of a gender-inclusive evaluation process – not everyone, yet, but definitely some of them have incorporated the new ideas that I learned in the course. The head of the organization, in particular, is very open minded; he’s a born and bred Liberian who just wants to make his country better – and he was actually the one who let me know about the course! I know that he’ll find a way.”

In the future, Ms. Francis hopes to secure funding in order to finance more of the work that she was doing with ACT. “One thing I’m really proud of is that, before I left, I started training sessions in rural communities to pass on the knowledge that I had gained,” she shared. “I wanted to ensure that they knew what steps to take, what rights they had, and how they could go about legalizing their land ownership. I’d love to do more work like that, educating the community – and especially women – about their rights and how they can secure them. Because it benefits all of us in the end, and that gives me hope.”

For the past 25 years, Kat has leveraged innovative storytelling to guide small businesses, startups, and non-profits in building relationships with their communities. As Resource Equity's Communications Manager, she focuses on sharing how our work to empower women through secure land and resource rights creates meaningful, systems-level change in the world.